As a staunch supporter of China's reform and opening up policy for propelling economic developments, Lee Kum Kee has been capitalising on opportunities and actively expanding its brand presence in Mainland China since the 1980s. In the early 1990s, Lee Kum Kee set up Lee Kum Kee (China) Trading Limited in Guangzhou and built production bases in Huangpu and Xinhui. Into the 21st century, the Group first acquired the Lee Kum Kee Building in Shanghai to serve as the headquarters of China Trading and recently it set up another production facility in Jining, Shandong Province as components of its business blueprint to complement the Group's network in China.

At the topping out ceremony, Mr. Alan Lui, Chief Financial Officer of Lee Kum Kee Sauce Group, conveyed his heartfelt appreciation on behalf of the Group for the support rendered by the Panyu District Office of the Guangzhou Municipal Government and, in particular, the close cooperation with Vanke after their collaborative efforts in the Lee Kum Kee Building project in Shanghai. He also thanked the construction team for all the hard work they had put in for the project and acclaimed that this project would play a key role in enhancing operational efficiency and accelerating business development.

Mr. Jiang Zhanrui, General Manager of Guangzhou Vanke South District, expressed hopes for Vanke and Lee Kum Kee to continue to work in tandem and drive progress through their partnership to make the Lee Kum Kee Building Guangzhou South Station the latest landmark in the region and achieve new milestones together.

Amidst the joyous vibe and celebratory atmosphere, guests marked the completion of the Building's main structure by shovelling the last layer of concrete mix on its rooftop. The commemorative act symbolised the beginning of a new chapter in the South China region for Lee Kum Kee.

Since the Groundbreaking Ceremony in March 2018, the project team worked relentlessly for over 600 days to complete the main structure of the Lee Kum Kee Building Guangzhou South Station, and the project is expected to complete all construction works by 30 August this year. The new building will feature an 18- storey building and an 11- storey building linked by a four-storey podium, totalling close to 40,000 square meters in gross floor area. The ground floor and first level are slated for commercial use while part of the fifth floor will be a podium garden sprawled across approximately 1,000 square meters. To fully capitalise on its prime location and proximity to the high-speed rail network, the atrium garden will provide easy access to the Guangzhou South Railway Station via a pedestrian underpass.

Located within Guangzhou Vanke World Expo, the Lee Kum Kee Building Guangzhou South Station is ideally situated in the heart of the Central Business District of Guangzhou South Railway Station. A stone's throw away from the bustling Guangzhou South Railway Station, this is a prime lot with immense potentials in the area. As the largest high speed railway station in Asia, Guangzhou South Railway Station takes the crown as the busiest transportation hub in China with an estimate of more than 112 million commuters clocked in annually. Concurrently, the station is well poised as an intersection where the east and the west coasts of Pearl River Delta meet, making it an integral economic hub of the "Guangdong-Hong Kong-Macao Bay Area" which congregates a steady and massive flow of people, logistics and traffic. In terms of long-term prospects, the China-Myanmar, China-Thailand and Trans- ASEAN high-speed railway networks will start from here as well. The proposed transcontinental railway network will pass through Nanning and Kunming to provide direct link to 10 ASEAN countries, spanning across landlocked territories totalling over 1 billion in population before reaching final destinations in the Indian Ocean region.

On completion, the Lee Kum Kee Building Guangzhou South Station will further invigorate the Group's exponential growth in China and be well-positioned to complement the Group's overarching blueprint through capitalising on the multitude of business opportunities arising from the "Belt and Road" initiative and the "Guangdong-Hong Kong-Macao Bay Area" Development Plan. Tapping on the regions along cross-border economic belts and the Greater Bay Area commerce zones, Lee Kum Kee can strategically leverage the distinctive advantages of this new prime location to promote Chinese culinary culture to the rest of the world.

In the spirit of "Constant Entrepreneurship", the Group has acquired the Lee Kum Kee Building in Shanghai and 3 Harbour Exchange in London respectively as its China Trading headquarters and its Europe Regional Office in recent years. The strategic business move on the construction of the latest Lee Kum Kee Building Guangzhou South Station is yet another part of its visionary planning. Leveraging the future economic prospects of the high-speed railway networks, Lee Kum Kee is geared to expand its business on the global scale and endeavours to fulfil its mission of "Promoting Chinese Culinary Culture Worldwide" by introducing savoury Chinese sauces and condiments to these regions. 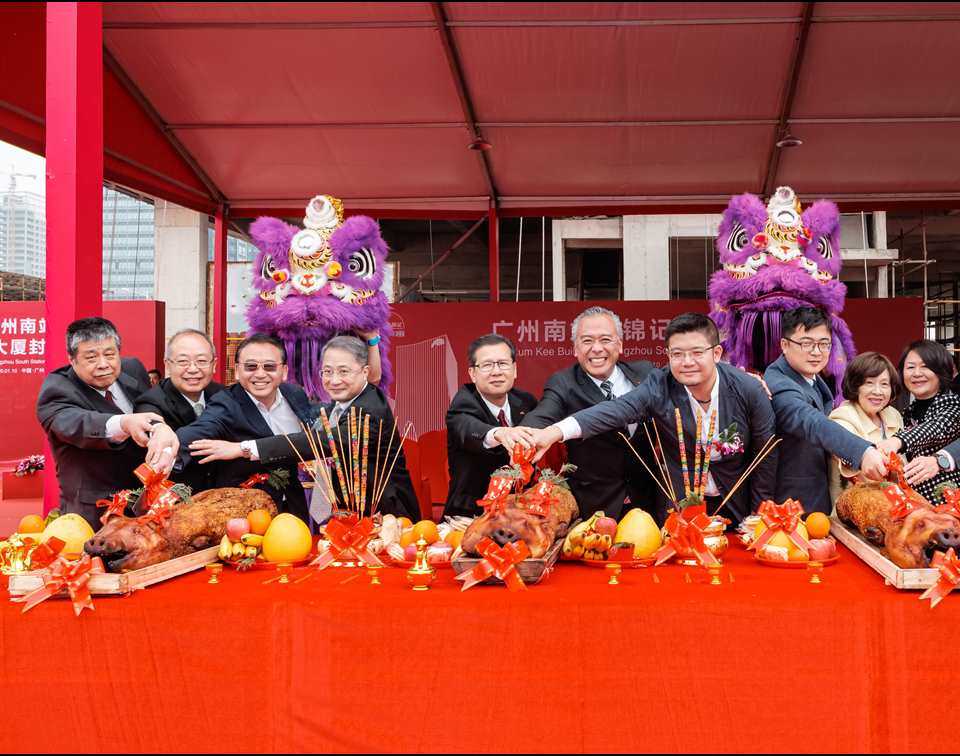